These are the things left by my grandfather. A Revolutionary Soldiers Certificate, a diary with the cover of Chairman Mao, a medal from the War to Resist US Aggression and Aid Korea.

Finally, last Saturday, my family moved into a new home we bought in 2014. For days I have been busy decorating the apartment.  One of the things was collecting some memorable photos to hang on the wall. Like this one,  the belongings of my grandfather who was the only one in our home village who returned from the war.

Born as farmers, my parents never knew how to protect or use them, nor could they read much. When I was little and my grandfather still alive, they were all put in a metal box without a lock under his bed. After his death, the box was abandoned in a dark corner under the stairs. So gradually, the Certificate was eaten by bugs and the diary torn up by someone little by little. When I was studying in primary school, the Certificate wasn’t broken, the diary was complete and I would read it time and again. For some reason, they mean a lot more to me than anyone in my family. So in December 2013, I brought them to Shenzhen and they are now safe with me.

The only photo of my grandfather, sitting on a rock outside our house.

My grandfather was half blind half deaf, with one leg disabled due to the bombs and bullets. He used to tell war stories, sing military songs, give us riddles and make us laugh. He was so strange as whatever the season he would wear the same uniforms  and bathe himself in the river from time to time. Where there was a shadow of him, there were kids laughing as he raised his voice like thunder and laughed like a storm.

According to the Certificate, as the family of a soldier, we should have been given some favored treatment. But after the war, my grandfather returned home as he was told and had written in his diary – “A soldier should obey the orders, go home and make productions.”

Yet, it seemed only a piece of paper buried in the darkness and my grandfather a forgotten soldier. Even when I had shown one copy to the related people in college, no one took it seriously or they just said coldly, “Out of time, useless”. Thus we still have no idea about the “favored treatment”.

As our home village is dying and even the villagers stopped celebrating Dragon Boat Festival and other things two years ago, about my grandfather, seemingly only the glory of his life and some memories are left.

PS:The commander was Chen Yi and the political commissar was Rao Shushi.

You know? Since ever China opened the door to the world, many of the poorest and the most remote Chinese villages began to die one after another. So has my home village.

This is the house which was built exactly the year I was born in 1986. It still looks new from the outside, doesn’t it? It was built up with rough mud and stones with black tiled roof. Outside the house, is a small shelter without a door. It’s the toilet made of two giant wooden buckets with only one short stepladder, and two pigsties. Between them, there is small space to store the pig shit and any other shit that could be used for fertilizer. Beside it in a small corner, there was a home for many lovely rabbits. But not now, not when I visited back in September 2014.

There are only my uncle and my auntie still living inside the house. All my side of the family moved out in 2008. Now all the wooden furniture has been eaten by bugs, all the metal farm tools rust in the damp, all the wooden floors are spread with rat shit and dead bodies of cockroaches, all the rooms are covered with a certain smell of dust, all the doors, windows, poles, beds and each corner have spider webs with different spiders building their homes. And because of frequant strong windy storms coming with big floods in summer, the mud walls gradually lean towards the right side. God knows when, the house will break and collapse to the ground, and if ever anybody would afford to build another one or just let the village completely die in silence. 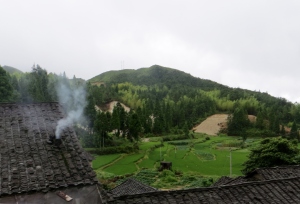 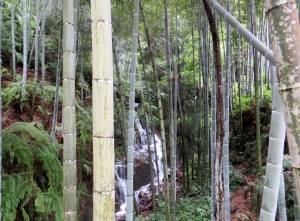 No matter what season and no matter where, there are always many places with dark green, light green, grass green or pure green. But due to less and less people using the wood burning stove, the chimney with the purple smoke gradually becomes more and more attractive to me. Living for about 15 years in a house surrounded by green fields growing rice, green trees rising to the sky, green wild plants and flowers and green wild fruits, with the smoke moving freely in the air, I feel the conception of freedom, much like a baby coming to the world naked. Unfortunately, it’s the high technology and money that drives the villagers away from their original place. They live far away from their birthplace. They now mostly live somewhere in a city with pollution, sighing to the cold wall made of concrete with grey or white paint falling now and again. They would question themselves, “Where do I belong?” Maybe many out there have some money, own a house out of downtown, buy a car driving around, marry to someone blindly and carry their family lines by having another son or even another illegal child. But really, are they all happy in the city? Happier than the old time when there was no single bridge to connect to the big cities? 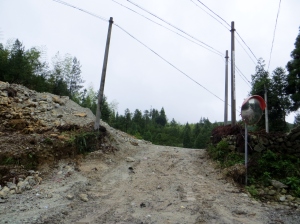 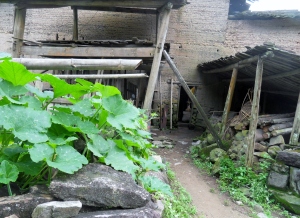 See the road? It’s a place located at Xiadang Township(This link -released old photos reveal Xi’s experience in Fujian, my hometown),where the current chairman, Xi Jinping, had work experiences before and visited again last summer, there is still corruption and corrupted feudal thinking. It has taken so long to build a proper road and it is still not finished. It’s definitely not lack of money but where the money has gone.

As a village on the edge of China, any idea for the good of its own might go nowhere. Just like no one knows how the cock communicates with the hen and how it is possible that the oldest woman still survives in my home village with her bound feet. Look at her, isn’t she like a model or something for a painter or photographer?

Look at the chickens, it seems they don’t even bother to talk to each other. They are the victims, just like those villagers who have moved to big cities and who also don’t bother to talk like they did before in the village.